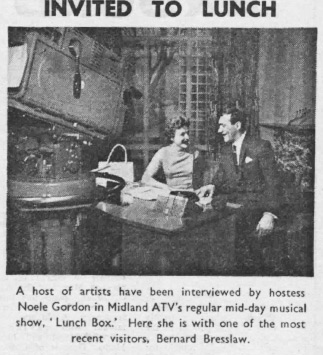 Each Thursday Noele Gordon conducts a musical quiz called Bongo. (between two sections of Lunch Box) Normally five viewers are invited to the studio to take part in the quiz, which might be said to take a sly dig at Take Your Pick.

But the Lunch Box gang had to move to a smaller studio recently and instead of having the participants in the studio Noele suggested viewers at home may like to try.

Replies were to be sent in by the following Tuesday and the first five correct answers received would be declared the winners of L.P. records.

The response was 40,000 letters and postcards!