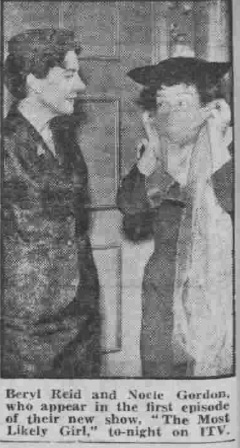 Noele Gordon is no stranger to acting, before joining Associated TeleVision as a presenter and producer the host of Tea With Noele Gordon and Lunch Box was a regular on the stage. She has three principal boy roles behind her in pantomime, including two in the Midlands, and a string of musical hits to her name including Brigadoon and Diamond Lil.

So it will come as no surprise that she takes on one of two lead roles in the suburban situation comedy The Most Likely Girl. “I’m sure people may find it strange, at first, that I’m Noele Gordon in the afternoon, and this evening I’ll be the sensible character Eve to Beryl Reid’s outrageous Arethusa. But I hope they’ll soon forget.”

Beryl Reid joins Associated Television for her first lead role as the wayward new neighbour Arethusa Wilderspin to Miss Gordon’s Eve Edwards. Miss Reid is best known to television audiences for her regular appearances with comedian Benny Hill on the BBC. In the theatre she was a popular personality in revue and variety productions including at the London Palladium as a singer, dancer and comedienne.

Can middle class Eve get along with working class Arethusa and her quirks? Can viewers accept Noele Gordon as someone else? Time will tell. The first episode airs on ATV Midlands this evening at 8.30.p.m.

1 thought on “The Most Likely Girls for ATV”