Noele Gordon comes back as a Star 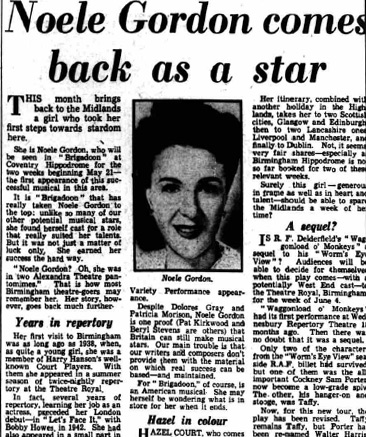 THIS month brings back to the Midlands a girl who took her first steps towards stardom here.

She is Noele Gordon, who will be seen in Brigadoon at Coventry Hippodrome for the two weeks beginning May 21s – the first appearance of this successful musical in this area.

It is Brigadoon that has really taken Noele Gordon to the top: unlike so many of our other potential musical stars, she found herself cast for a role that really suited her talents. But it was not just a matter of luck only, she earned her success the hard way.

“Noele Gordon? Oh she was in two Alexandra Theatre pantomimes” that is how most Birmingham theatre goers may remember her. Her story, however, goes back much further.

Her first visit to Birmingham was as long ago as 1938, when, as quite a young girl, she was a member of Harry Hanson’s well-known Court Players. With them she appeared in a summer season of twice-nightly rep at the Theatre Royal.

In fact, several years of repertory, learning her job as an actress, preceded her London debut in Let’s Face It with Bobby Howes in 1942.

She had also appeared in a small part in The Lisbon Story before she came to Birmingham to play principal boy two years in succession at the Alexandra. Those two pantos Cinderella (1944) and Dick Whittington (1945) really set her on the road to stardom.

When she left Birmingham she into A.P Herbert’s Big Ben. It proved a disappointment, but not before she had emerged with a deal of credit for what there was good in it. Then she appeared with Mae West in the musical Diamond Lil.

After that came Brigadoon, with its long London run, followed by the current tour. It has also earned her a Royal Variety Performance appearance.

Despite Dolores Gray and Patricia Morison, Noele Gordon is one proof (Pat Kirkwood and Beryl Stevens are others) that Britain can still make musical stars.

Our main trouble is that our writers and composers don’t provide them with the material on which real success can be based – and maintained.

For Brigadoon, of course, is an American musical. She may herself be wondering what is in store for her once it ends.