Slip of the tongue 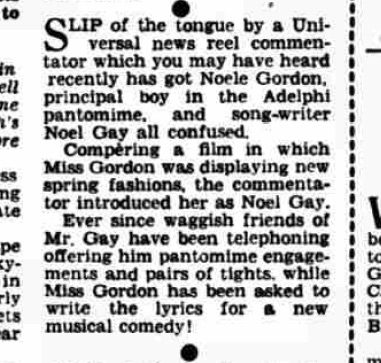 SLIP of the tongue by a Universal News Reel commentator which you may have heard recently has got Noele Gordon, principal boy in the Adelphi Pantomime, and song-writer Noel Gay all confused.

Compèring a film in which Miss Gordon was displaying new spring fashions , the commentator introduced her as Noel Gay.

Ever since waggish friends of Mr. Gay have been telephoning him offering him pantomime engagements and pairs of tights.

Meanwhile Miss. Gordon has been asked to write the lyrics for a new musical comedy!