What they want in Pantomime 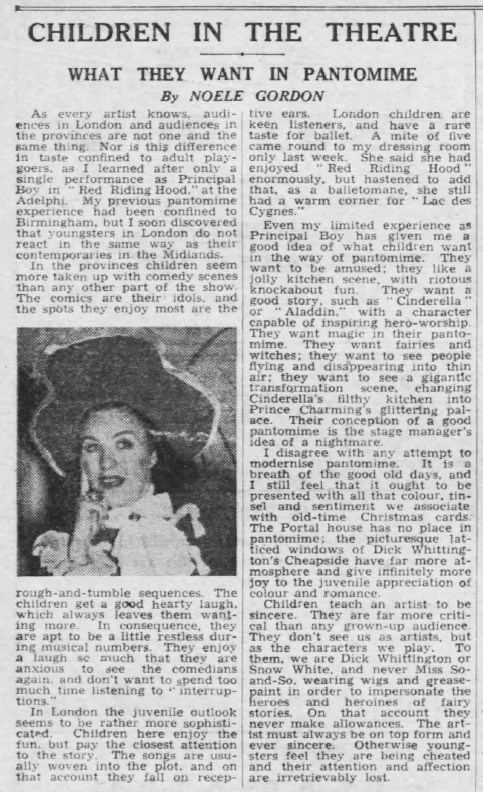 As every artist knows, audiences in the provinces are not one and the same thing. Nor is this difference in taste confined to adult play goers as I learned after only one performance as Principal Boy in Red Riding Hood at the Adelphi.

My previous pantomime experience had been confined to Birmingham, but I soon discovered that youngsters in London do not react the same way as their contemporaries in the Midlands.

In the provinces children seem more taken up with comedy scenes than any other part of the show. The comics are their idols, and the spots they enjoy most are the rough-and-tumble sequences.

The children get a good hearty laugh,which always leaves them wanting more. In consequence, they are apt to be a little restless during musical numbers. They enjoy a laugh so much they are anxious to see the comedians again and don’t want to spend too much time listening to ‘interruptions’.

In London the juvenile outlook seems to be rather more sophisticated. Children here enjoy the fun, but pay the closest attention to the story. The songs are usually woven into the plot, and on that account they fall on receptive ears.

London children are keen listeners, and have a rare taste for ballet. A mite of five came round to my dressing room only last week. She said she had enoyed Red Riding Hood enormously, but hastened to add that, as a balletomane, she still had a warm corner for Lac Des Cygnes.

Even my limited experience as Principal Boy has given me a good idea what children want in the way of panto. They want to be amused; they like a jolly kitchen scene, with riotous knockabout fun. They want a good story such as Cinderella or Aladdin with a character capable of inspiring hero-worship

They want magic in their pantomime. They want fairies and witches; they want to see people flying and disappearing into thin air; they want to see a gigantic transformation scene, changing Cinderella’s filthy kitchen into Prince Charming’s glittering palace.

Their conception of a good pantomime is  the stage manager’s idea of a nightmare. I disagree with any attempt to modernise panto. It is a breath of the good old days, and I still feel it ought to be presented with all that colour, tinsel and sentiment we associate with ‘old-time Christmas cards’.

The Portal house has no place in pantomime; the picturesque latticed windows of Dick Whittington Cheapside have far more joy to the juvenile appreciation of colour and romance

Children teach an artist to be sincere. They are far more critical than any grown-up audience. They don’t see us as artists, but as the characters we play. To them we are Dick Whittington or Snow White, and never Miss so-and-so wearing wigs and grease-paint in order to impersonate the heroes and heroines of the fairy stories.

On that account they never make allowances. The artist must always be on top form and ever sincere, otherwise youngsters feel they are being cheated and their attention and affection are irretrievably lost.

The Stage, written by Noele Gordon, 1947