Time to Move Out at Number Two 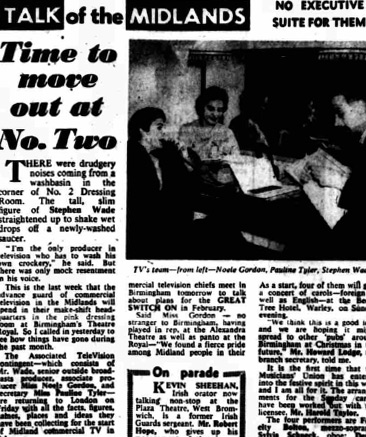 There were drudgery noises coming from a washbasin in the corner of No.2 dressing room. The tall, slim figure of Stephen Wade straightened up to shake wet drops off a newly washed saucer.

“I’m the only producer in television who has to wash his own crockery,” he said. But there was a mock resentment in his voice.

This is the last week that the advanced guard of commercial television in the Midlands will spend in their make-shift headquarters in the pink dressing room at Birmingham’s Theatre Royal. So I called in yesterday to see how things have gone during the past month.

The Associated Television contingent – which consists of Mr. Wade Senior Outside Broadcast Producer, Associate Producer Miss Noele Gordon and secretary Miss Pauline Tyler – are returning to London on Friday with all the facts, figures, names, places and ideas they have been collecting for the start of Midland Commercial Television in February.

They have been working from the pink dressing room, which, despite its office typewriter, telephone, files and papers, still looks and feels like a dressing room. “Sometimes we have been here till midnight” said Mr Wade, “Then we’ve gone back to the hotel and continued discussions until the early hours. Sometimes it has been rather tiring.”

Much of the shape and style that commercial television will take has been thrashed out in that eight-by-ten dressing room in the past month. Among the visitors to it have been ATV chiefs Val Parnell, Harry Alan Towers and Lew Grade. Perhaps a plaque will be put on the door some day.

“I’m sorry I can’t tell you much about the material we’ve gathered” said Mr Wade, “policy, you know.” Maybe we’ll hear more about that when the Lord Mayor Alderman, A. Lummis Gibson, and TV chiefs meet in Birmingham tomorrow to talk about plans for the great switch on in February.

Said Miss Gordon – no stranger to Birmingham having played in rep, at the Alexandra Theatre, as well as panto at the Royal:

“We found a fierce pride among Midland people in their industrial achievements, but we were surprised to find they are far from being Midland-centred. They want television to show them how other people live and what goes on in other cities – as for instance, all the women I spoke to wanted to see fashion shows from London stores rather than those in Birmingham. It has been an interesting experience.”

Well the experience is all but over for now. But after all the facts and figures have been sorted out in their London offices the three will be back in Birmingham in January – but not in dressing room no.2, they will have proper offices at their new Gosta Green Studios, where TV producers won’t have to wash their own crockery.