Noele supported over 30 charities during her career, from the Royal National Lifeboat Institution to the Royal National Institute for Blind People and several local good causes in the Midlands, however her biggest success was one she helped establish in the 1970s – Crossroads Care.

The needs of carers first came to the attention of Crossroads producer Reg Watson as a result of the storyline in the soap involving the character Sandy Richardson (Roger Tonge), who was left paraplegic after a car accident. Sandy had been a regular in the show since 1964, and viewers followed his lifestyle change from being a fully able-bodied former to having to depend on the care of his mother Meg (Noele Gordon.

An ATV Network press release at the time of the storyline noted: “The idea is to show viewers that Handicapped people value their independence and also the devoted care given to them by their relatives.”

When Noele Gordon, playing Sandy’s mother and carer, was due to take a months holiday the scriptwriters were faced with the dilemma of who would look after Sandy.

This everyone at ATV soon realised was, and indeed still is, an issue faced by many carers who have no other help with their caring duties. It was Noele herself who started the wheels rolling for ATV to ‘do something about it’. At the time of the story no government-funded assistance was available, nor was there any charity offering support.

In the show, Meg helped launch a fictional Caring for Carers scheme. Letters and phone calls to ATV soon were asking about the service. Concerned that there wasn’t any help open to the viewers contacting the television station, Noele spoke with the studios’ medical advisor Dr Richard Hudson-Evans who backed her suggestions of turning the fictional Caring for Carers scheme into a real service.

The organisation would be tasked with providing relatives with the opportunity to take a break from caring for their loved ones. Noele, Dr Richard and producer Reg Watson approached ATV Network Senior Director Leonard Mathews who agreed for the television company to make funds available for a pilot scheme. The initial trial service would run for two years in Rugby, Warwickshire, launching in 1974. ATV invested the founding £10,000. 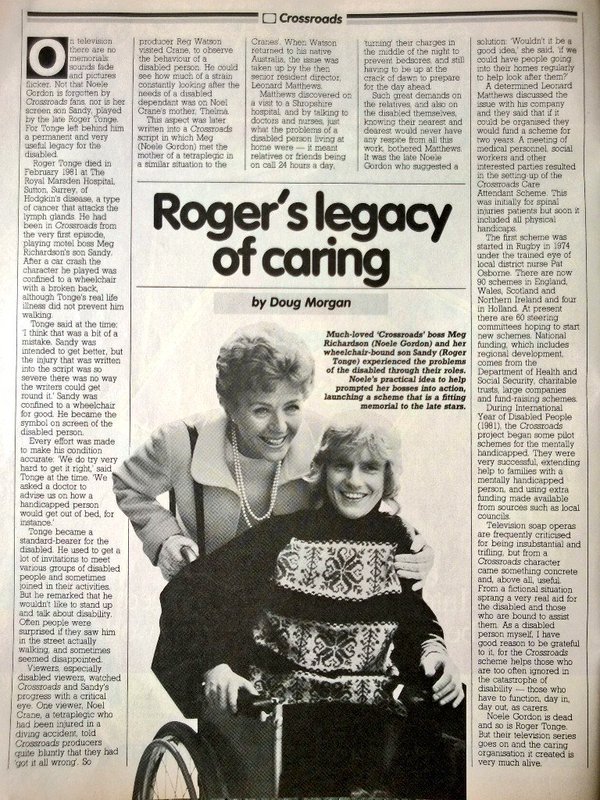 On television there are no memorials; sounds fade and pictures flicker. Not that Noele Gordon is forgotten by Crossroads fans, nor is her screen son Sandy played by the late Roger Tonge. For they left behind them a permanent and very useful legacy for the disabled.

Roger Tonge died in February 1981 at the Royal Marsden Hospital, Sutton, Surrey, of Hodgkin’s disease, a type of cancer that attacks the lymph glands. He had been in Crossroads from the very first episode, playing motel boss Meg Richardson’s son Sandy. After a car crash the character he played was confined to a wheelchair with a broken back, although Tonge’s real life illness did not prevent himf rom walking.

Tonge said at the time: “I think that was a bit of a mistake. Sandy was intended to get better, but the injury that was [eventually] written into the script was so severe there was no way the writers could get round it.” [Reg Watson in an interview at the time however said it was always his intention to keep Sandy disabled]. Sandy was confined to the wheelchair for good.

He became the symbol on screen of the disabled person. Every effort was made to make his condition accurate. “We do try very hard to get it right” said Roger at the time, “We asked a doctor to advise us on how a handicapped person would get out of bed for instance.” Tonge became a standard-bearer for the disabled. He used to get a lot of invitations to meet various groups of disabled people and sometimes joined in their activities.

Often people were surprised if they saw him in the street actually walking – and sometimes seemed disappointed! Viewers, and especially disabled viewers, watched Crossroads and Sandy’s progress with a critical eye. 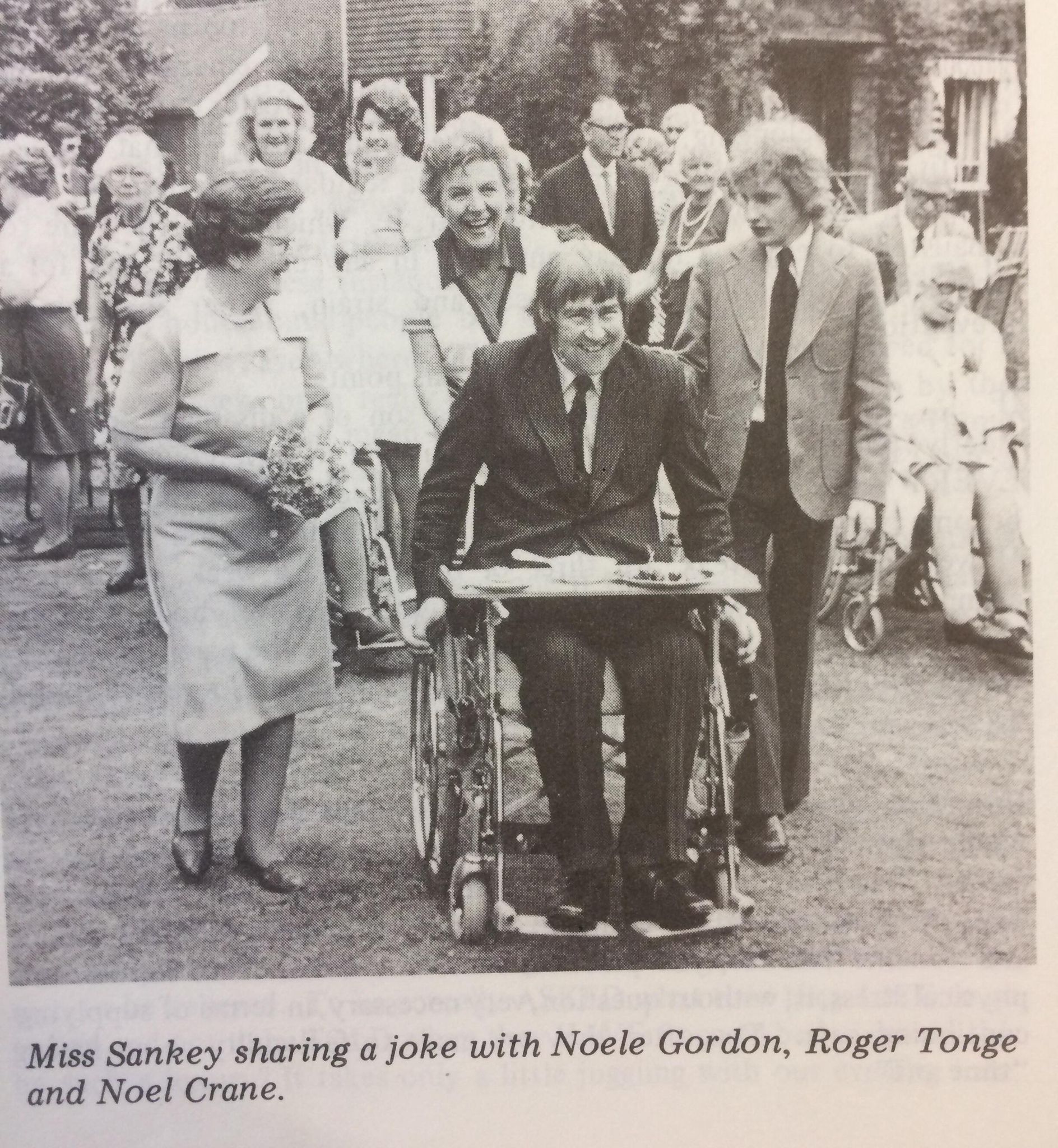 One viewer, Noel Crane, a tetraplegic, who had been injured in a diving incident contacted ATV with suggestions. Producer Reg Watson visited Crane to observe the behaviour of a disabled person. He could see how much of a strain constantly looking after the needs of a disabled person was on Noel Crane’s mother Thelma. This aspect was later added into the programme when Meg (Noele Gordon) met the mother of a tetraplegic character in a similar situation to the real-life Crane family.

ATV’s Leonard Matthews discovered on a visit to a Shropshire hospital, and by talking to the doctors and nurses just what the problems of a disabled person living at home were – it meant relatives or friends being on call 24-hours-a-day, turning their disabled relatives in the middle of the night to prevent bedsores, and still having to be up at the crack of dawn to prepare for the day ahead. Such great demands on the relatives, and also on the disabled themselves, knowing their nearest and dearest would never have any respite from all this work, bothered Matthews.

It was Noele Gordon who suggested a solution; “Wouldn’t it be a good idea”, she said, “if we could have people going into their homes regularly to help look after them?” ATV looked into creating an organisation that they would fund for the first two years of operation. A meeting of medical personnel, social workers and other interested parties resulted in the setting up of the Crossroads Care Attendant Scheme. This was initially for spinal injuries patients but soon it included all physical handicaps

The first scheme began in Rugby in 1974. 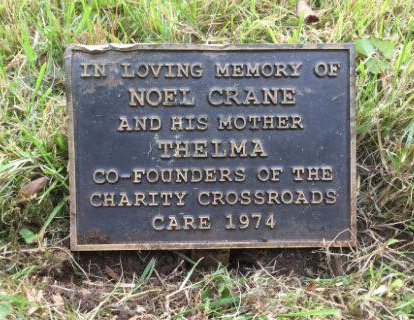 During the International Year of Disabled People in 1981 the Crossroads project began some pilot schemes for the mentally handicapped, and proved very successful.

Television soap operas are frequently criticised for being insubstantial and trifling, but from a Crossroads character came something concrete and, above all, a very real aid for the disabled and those who are bound to assist them.

As a disabled person myself, I have good reason to be grateful to it, for the Crossroads scheme helps those who are too often ignored in the the catastrophe of disability – those who have to function, day in, day out, as carers.

Noele Gordon is dead and so is Roger Tonge. But their television series goes on and the caring organisation it created is very much alive.